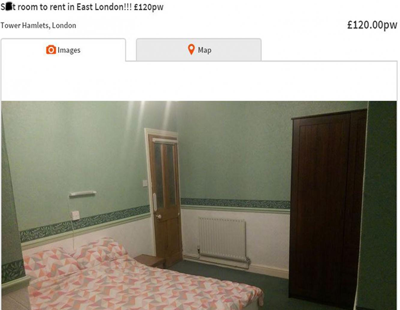 A letting agent in London has ditched the usual euphemisms and gone for the blunt approach by describing rooms to let as “sh**y”.

If the tactic was to generate publicity for letting agent Luis Swarovski it appears to have worked, for in addition to this story several newspaper and online websites have reported how his advertisements appeared on Gumtree.

The advert says: "This property has to offer three s***ty double rooms available for single person or couple. The rooms are fully furnished. Very clean, and tidy.”

With a casual disregard for spelling and proof-reading, it goes on to say: "The wardrobe is broke on the top, tha mattress doesn't match with the base. [sic] Obviously, if you're interested we will change everything for you. The flatmates are all professional between the ages of 20-30."

Swarovski told the Evening Standard that the advertisement aimed to be “an honest reflection of the current state of the property” but reassured future tenants that the rooms would be improved before they moved in.

"Obviously if someone moves in it will not be like that anymore."