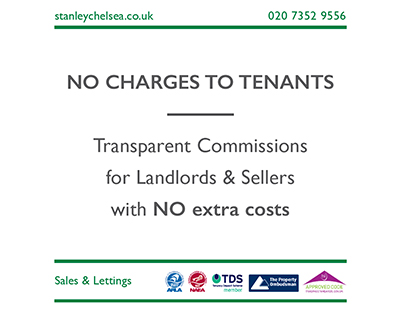 A letting agency in London has announced that it has dropped all fees it charges to tenants.

STANLEY Chelsea, a one branch agency situated in West London, says it has always tried to minimise tenant admin charges but has now dropped them altogether.

The firm is run by Patrick Bullick, a former Chairman of The National Association of Estate Agents, who says that his staff 'shares' the public's aversion to letting agent fees charged to tenants.

"Virtually the only thing that the Mayoral candidates had in common was their vocal opposition to such charges," he says.

"Many MPs, Shelter and Generation Rent are also actively campaigning against charges to tenants."

The agency is now issuing a flyer to 40,000 households with the message:

'NO CHARGES TO TENANTS'

'Transparent Commissions for Landlords & Sellers with NO extra costs'

As of May last year it has been a legal requirement for all letting agents to display the fees they charge to landlords and tenants in their offices and on their websites, as well as make clear which redress scheme they are a member of and whether they offer client money protection.

Letting Fees UK has so far researched over 700 agencies across the country and calculates the average fee paid by two tenants at the start of a tenancy as £391.

One of five people vying for selection as Labour’s candidate in...