Rental growth in London remained relatively stable during the first quarter of 2017, according to Benham & Reeves Residential Lettings.

The firm's research has identified postcodes SW18, SW11 and SW9 as three hotspots for investors where rental growth exceeded 4% during Q1.

Compared to the final quarter of 2016, demand from applicants for the Battersea and Nine Elms postcodes increased by 17% in the first three months of the year.

The London agency says the 'remarkable' growth is down to the launch of several high profile developments, including the overhaul of Battersea Power Station.

The majority of postcodes recorded rental growth of 0-2% during Q1, with 10 locations registering growth between 2% and 4%.

Benham & Reeves Residential Lettings also reports that its lettings transactions were up by over 12% in the first quarter of 2017 when compared with the same period the year before.

The firm's message to its clients is 'buy-to-let isn't dead, it simply requires a more strategic focus'.

It says that buy-to-let hotspots continue to centre around lifestyle amenities and accessibility of transport links.

The research shows that some of London’s priciest postcodes have been witnessing declining rents from 'unsustainable highs' a few years ago - and the agency says that, from a tenant’s perspective it has never been a better time to rent in Prime Central London.

“Predictions that a flood of landlords will abandon their buy-to-let portfolios have been greatly exaggerated. We have seen very few clients exit the rental market this year – in fact most are actively looking to invest further,” says Benham & Reeves’ lettings director, Marc von Grundherr.

“The fundamentals continue to remain strong and that is why our outlook on London property continues to be bullish. Professional investors have been able to navigate these legislation changes and capitalise on these localised rental hotspots.”

Earlier this week, the latest HomeLet figures showed that in April average rents in the capital fell for the first time since December 2009. 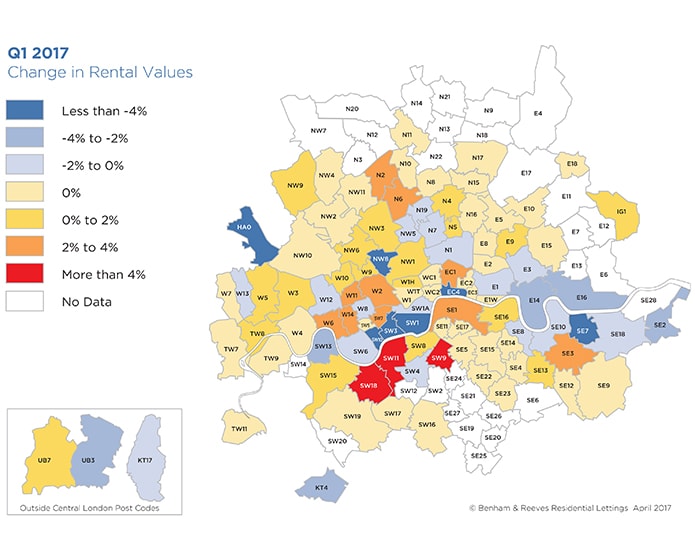