Labour claims it was the driving force behind the government’s decision to cap tenants’ security deposits from six weeks to five for annual rentals under £50,000; the measure is today back in the House of Lords for debate.

The government announced the move last week as part of its amendments to the Tenant Fees Bill, after substantial speculation in the press; at the time Housing and Communities Secretary James Brokenshire said: “Everyone deserves a home to call their own. Yet for some renters, moving to a new house can be difficult due to high upfront costs and letting fees. This is unacceptable.”

However, now Labour is taking responsibility for the move.

In a tweet over the weekend Melanie Onn MP, a shadow housing minister, wrote: “Labour win! Won amendments to the tenants fees bill that reduces amount of deposit renters will pay from 6 to 5 weeks. Govt hadn’t wanted to change anything so is GREAT news.” 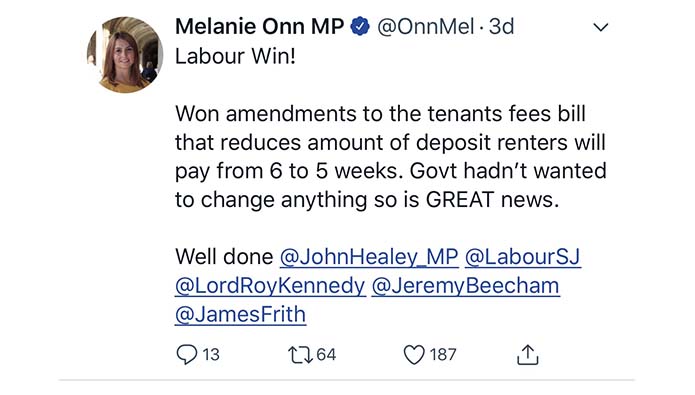 The change, when first announced by the government last week, provoked anger across the lettings industry.

David Cox, ARLA Propertymark chief executive, says: “Once again politicians are attacking the industry for their own purposes. Tenancy deposits have worked perfectly well for over a decade, and there is no basis in research that these amendments are necessary. This move will do nothing but push the most vulnerable in our society away from professional landlords and agents, and into the hands of rogue landlords and agents who will exploit them.”

David Smith, policy director for the Residential Landlords Association, says: “Landlords will feel badly let down by a government which says it wants to support good landlords. The government had accepted that a cap of six weeks was the minimum many landlords required. This is needed to address the problem of tenants who fail to pay the last month's rent and leave a property damaged.”

And Richard Lambert, chief executive of the National Landlords Association says: “A six-week cap is the lowest landlords find acceptable. Does the government really not realise that if landlords don’t think the deposit covers the risk of damage or unpaid rent, they will be even more cautious about who they let to? All this will do is make it harder for tenants with poor credit ratings or who want to have a pet to find a suitable home. This is clearly a political move aimed at the renters’ vote. It is not a policy for business.”

Properties with rents above £50,000 per year will continue to be subject to a security deposit capped at the original six weeks’ rent.

The Tenants Fees Bill today moves to its Report Stage in the House of Lords where amendments will be voted on and the legislation will be further scrutinised line by line.