Activists from the so-called renters’ union Acorn have held a protest outside the office of a lettings agency in Oxford.

A photograph of the protest, which appeared to involve no more than three people but a large number of placards, was posted on Twitter with the message: "Acorn Oxford is making a statement outside College & County letting agents … They claim to be ‘ethical’ while being one of the loudest voices against the landlord licensing scheme.”

Oxford council is the latest authority to want to strengthen existing licensing for the private rental sector, with a selective licence proposed to be £480 for five years.

With its high number of students the city council says 49 per cent of its housing stock in rented and in a recent report advocating a selective licensing scheme it claimed that over 6,000 of the 30,500 homes in Oxford’s private rented sector had a “serious housing hazard.”

It’s also had over 3,350 complaints in five years concerning rented property, and has served 2,451 housing and public health notices and carried out 4,058 investigations into anti-social behaviour related to private rented housing. The complaints apparently related to 2,990 specific properties. 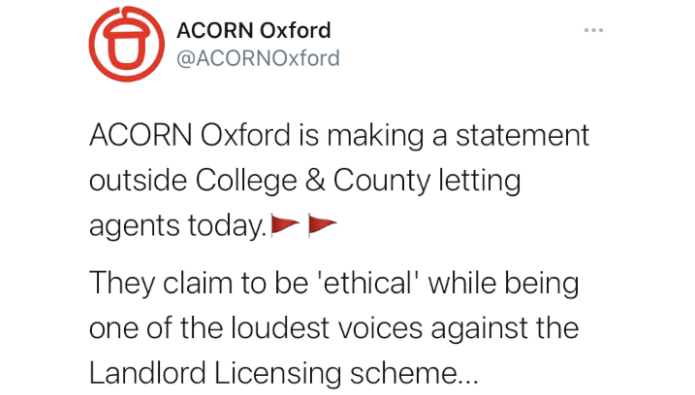 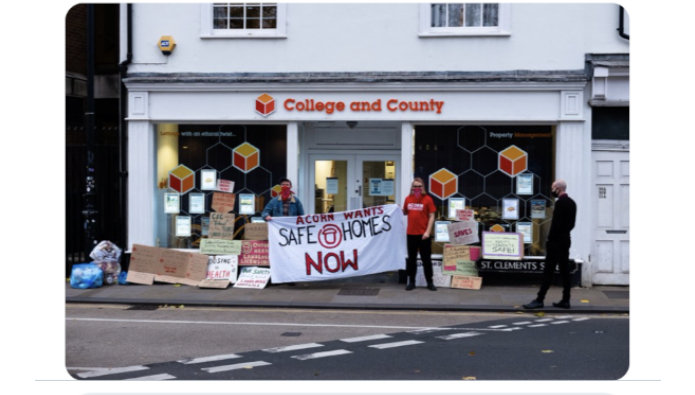 College & County, on its website, has raised questions on the figures given by the council.

The agency is also querying the enforcement proposals outlined by the Labour-controlled council, and suggests that the statistics put out by the authority implies that “there is a high probability that a privately rented property via a managing agent may not be inspected through the course of its five-year license at all, unless the tenants raise a concern with the Council of their living conditions. This is the current recourse already in place for tenants with no clear additional benefit achieved with a license.”

College & County adds that the National Residential Landlords Association is critical of the council initiative, claiming that its past schemes have led to rents increasing, and to those on lower incomes in the city being driven out of the city.

The agency says: “In the Selective Licensing Scheme, the most clear-running theme is and will continue to be the importance of enforcement of all properties. Without across the board enforcement, licensing would become a burden on those seeking to comply, leaving those willing not to do so, those operating within the shadow lettings market, with an advantage.

“It would be important to avoid the perception of ‘entrepreneurial bureaucracy’, the taking of license fees from compliant landlords to pay to tell them that they were compliant, rather than identifying and cracking down on those providing homes with category 1 and 2 health risks.”

Police were called to a protect outside a lettings firm in...

Imperial College London has paid £30m to acquire half of London’s...