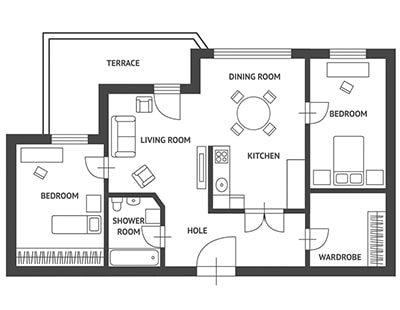 A new floorpan tool has been launched which its founder claims to be “quicker and easier to use” than predecessors.

Agents can add photographs, spoken notes and comments to the resulting floor plan, which displays the room dimensions in imperial and metric. These can be exported in a range of industry software formats, and instantly uploaded to the web as 2D floor plans and 3D models.

It’s called RoomScan LiDAR and is the brainchild of Max Christian, who founded Metropix back in 2004.

The LiDAR laser scanners that the app uses are currently found in the latest iPad Pro, launched in March this year. Christian says the next-generation iPhone, due in late 2020, is expected to feature the same technology.

“Using the iPad Pro’s improved scanners we can measure a room in seconds, add doors and windows, and link rooms together with just a few taps of the screen” he says.

Floorplan firm claims higher rents for listings with its plans ...

A floorplan supplier to the agency industry claims such plans lead...

Almost one in five homes to let now advertised with floor-plans - claim ...

Some 18 per cent of lettings properties are advertised with floorplans...