Campaigners against letting agents and landlords appear to suggest that the issue of rising rents is uniquely confined to the UK - but new figures show that is not the case.

An international index produced by the Housing Anywhere company shows that in the third quarter of 2021 there was an overall trend of increasing rents for all accommodation types including flats, private rooms and studios.

After a reversal of the rent cap in the German capital, Berlin apartment rental prices recorded the sharpest year over year increase with a striking 22.36 per cent, followed by Hamburg on 19.94 per cent. Reykjavík in Iceland showed a 14.70 per cent rise and Italy’s Milan reports a 14.36 hike.

The index says that as the third quarter is usually the peak rental season for students, some increase in rental prices was to be expected.

“However, as mobility is normalizing for both students, young professionals and tourists alike, shortages in rental accommodation have become painfully evident once again, driving up prices even further. Even the Spanish and Italian cities are picking up speed on the rental price increase after some notable drops in the previous quarters” it says.

“Undersupply of accessible rentals felt less severe in 2020 due to short-term rental properties becoming available for longer-term rental on top of global mobility restrictions. However, as predicted, we now see a reversal of this trend as both holiday rental and mobility are reviving” says Djordy Seelmann, chief executive of HousingAnywhere.

“Shortages will become even more pressing once all travel restrictions are lifted, and municipalities should look for counteracting measures as soon as possible.”

He says the situation is especially dire in major European university cities, with some universities even reporting students dropping out or deferring their studies due to challenges in finding accessible accommodation.

Seelmann comments: “There is an urgent need for more accessible housing for students and young professionals, especially in those cities that are attracting internationals. Unfortunately, development of new residential property is not a simple matter, and even with the right permit, it normally takes years to be completed and available.

“Therefore, we urge policy makers to critically assess current housing and rental policies to find solutions that can immediately address this problem. For example, governments should take action right now to prevent the residential housing stock from returning to the short-term holiday rental industry. In addition, repurposing vacant commercial buildings to residential use with a proper permit can be accelerated.” 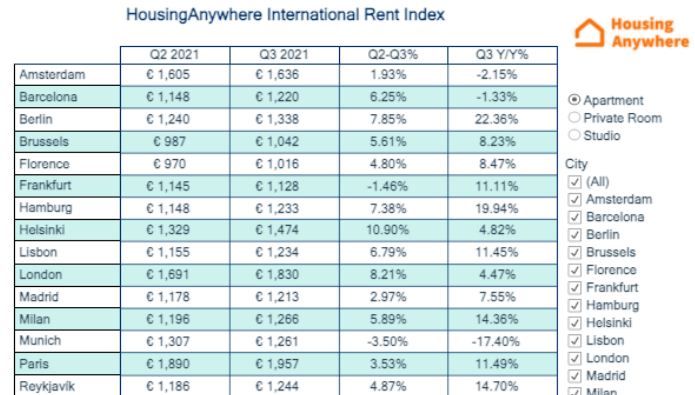 HousingAnywhere, a rental platform specialising in accommodation for young professionals and students,...

London rents still the most expensive in Europe despite virus slowdown ...

The typical rent for a London property makes it “the undefeated...

New research shows that some buy to let investors in London...