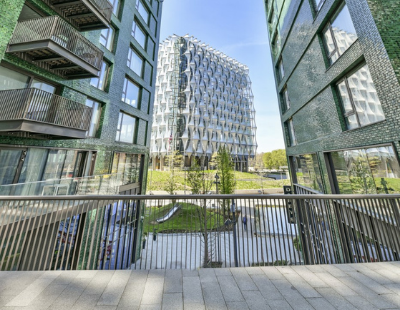 It’s been announced that UK Sotheby’s International Realty has secured tenants for 20 apartments in record time at Embassy Gardens, a popular development at the huge regeneration project of Nine Elms.

The corporate client who owned the mix of one and two-bedroom apartments approached Diana Tran at UK Sothebys’s International Realty in May, to source suitable tenants on a long let.

Reflecting the high-end feel and look of the area - which is home to the new US Embassy and a range of glossy towers, one of which includes a suspended glass-bottomed acrylic pool - the weekly rental prices ranged from £700 to £1,200 and, by July, all of the units had tenants in situ.

“We worked round the clock for our client to secure the tenancies as quickly as possible. When working on behalf of a fund, it is essential to manage void rates in order to protect the investment – this was always our objective,” Diana Tran MARLA, Associate Director for UK Sotheby’s International Realty Residential Lettings in Central London, said.

The prime agency said the new tenants at Embassy Gardens are a combination of domestic and international, from Europe and Asia.

The travel restrictions during Covid made it more difficult for prospective overseas tenants to commit to renting here whilst being based abroad, Sotheby’s International said.

As a result, domestic renters had the upper hand while restrictions were in place. However, now that restrictions have eased, UK Sotheby’s International Realty says it has a waiting list of people eager to snap up new apartments.

The motivation for new tenants to rent at Nine Elms was driven by the desire for a change of scenery and more living space, the firm said.

It added that the apartments appealed to many entrepreneurial/start-up self-employed individuals, needing a London or UK base, a handful of students and some private bankers and financiers.

The agency said Nine Elms’ accessible location, outside space, good transport connectivity, and the 'impressive Sky Pool complex' was also a big draw for many of the tenants, especially after the disruption to everyday life during the pandemic.

Guy Bradshaw, managing director at UK Sotheby’s International Realty, said: “The fund who had acquired the units wanted occupation as swiftly as possible. The majority of the tenancies were secured at the asking price or close to, which again reflects the demand for best-in-class property in the capital.”

On Monday, Nine Elms was one of two new stations – along with Battersea Power Station – to open in the first major expansion of the London Underground this century.

The first train on the new £1.1 billion Northern Line route departed from Battersea Power Station in south London at 05:28 on Monday, calling at Nine Elms before reaching the existing station of Kennington. Sadiq Khan, the London Mayor, said the services would play ‘a major role’ in the capital's recovery.

Nine Elms, until recently one of the capital’s final industrial quarters, home to a huge number of vast brownfield sites, has been undergoing considerable transformation in recent years to turn it into London’s latest residential and business quarter.

That said, it has faced criticism for being unaffordable, too exclusive, too built-up and home to empty homes with tumbling prices. A Guardian feature earlier this year suggested Europe’s biggest regeneration project had fallen flat, with tumbling prices, investors melting away and promises turning to dust, while the Telegraph wrote a piece last week suggesting that investors are fleeing the nightmare on Nine Elms street despite the new Tube stations and ongoing regeneration work.

By contrast, a previous report from global real estate firm JLL suggested that the area will come of age in 2021.

Rents tumble in parts of London swamped with new-build apartments ...

An analysis by investment specialists London Central Portfolio reveals that in...

Rokstone has launched a new lettings division, operating out of the firm’s...

A London lettings agency - that has now entered bankruptcy -...