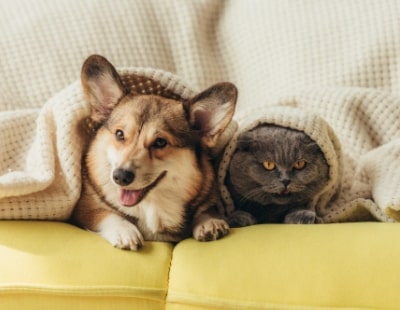 Pressure is growing to amend the 2019 Tenant Fees Act to allow charging additional deposits and insurance to cover pets in private rental accommodation.

The political website Politics Home says Conservative MP and long-standing animal rights campaigner Andrew Rosindell has written to the Housing Secretary urging that private tenants be allowed to keep pets in their properties.

They say agents and landlords should be able to charge pet-specific fees - such as insurance costs or additional deposits - with the 2019 Tenant Fees Act amended to make the fees legal.

Rosindell is a long-time advocate of keeping pets in rental properties.

He is promoting the Dogs and Domestic Animals Accommodation and Protection Bill in the House of Commons. The measure - which has had its first reading but has yet to make significant progress because of a backlog of Commons activity caused by the pandemic - is urging a reform of laws allowing dogs and other animals to be kept in rented accommodation so long as owners can demonstrate their care for them.

Rosindell has also stated in the past that he wants a change to the Tenant Fees Act.

In a foreword to a report by pro-pet group AdvoCATS, Rosindell wrote earlier this year: “The Tenant Fees Act of 2019 had positive aims but it has clearly been harmful to the cause of greater pet ownership fo renters, an issue which has come to a head given the loneliness and self-isolation many have suffered during this pandemic, something which a dog or a cat could really ameliorate.

“Amending it to allow for landlords to require insurance as part of the permitted payments might only be a start, but it would be a positive start and I hope the government explores this as an option.”

Supporters of Rosindell’s letter to Jenrick point out that a simple Commons vote on an amendment to the Act would be sufficient to trigger the change - completely new legislation, potentially taking years, would not be required.

There have been several pressure groups and politicians calling for change to allow pets, especially following the pandemic’s restrictions prompted a surge in the purchase of dogs in particular.

A spokesperson for the Ministry of Housing, Communities and Local Government says: “Our changes to the Model Tenancy Agreement will help make it easier for tenants with pets to rent privately by removing restrictions on responsible tenants with pets and encouraging landlords to offer greater flexibility.

“They aim to strike a balance between protecting landlords’ property from being damaged by badly behaved pets, whilst ensuring responsible tenants are not unfairly penalised.”

You can see the PoliticsHome story here.