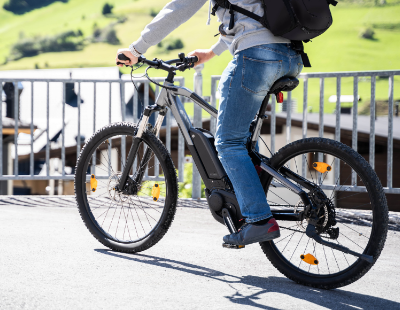 An independent agency in London has ditched its company cars and gone over to e-bikes instead when it’s representatives attend viewings.

Taylor Gibbs, in the north of the capital, have made the bold move to ditch their cars in favour of the Electric Bike to conduct their viewings.

“As a company we are acutely aware the whole planet is currently in a climate emergency. By making changes to how our office operates, we hope that we can make a difference” explains director Zia Taylor.

The number of electric cars being used in the agency’s fashionable north London patch of Highgate has increased significantly over the past 12 months and by using electric bikes the firm says it will contribute towards trying to reverse climate change.

‘The roads are heavily congested, and we spend too much time in traffic. Cycling will reduce the time spent travelling between appointments freeing up valuable time that can be used in a more productive manner” explains the firm in a statement.

Taylor Gibbs already sends property particulars to prospective tenants and buyers digitally and uses electronic-signing software in a drive to limit the amount of paper used in the office.

Taylor Gibbs already sends property particulars to prospective tenants and buyers digitally and uses electronic-signing software in a drive to limit the amount of paper used in the office.

Taylor continues: “We are all keen to be more eco-friendly and the move to use electric bikes to carry out our viewings was welcomed by all the staff at Taylor Gibbs. Eager to move towards being as environmentally aware as possible we are all excited about this transition.

“E-Bikes won’t entirely replace car trips, but it is safe to say they will reduce costs and the time staff take to commute to appointments, it is good business sense as well coupled with green benefits.  Reducing pollution and traffic congestion along with the health benefits are a few of the many advantages of making this change.”

Oxfordshire sales and lettings agency Parkers - one of the brands...

Agency and landlord clients come to the aid of ICU frontline nurses ...

An agency and its landlord clients have come to the aid...