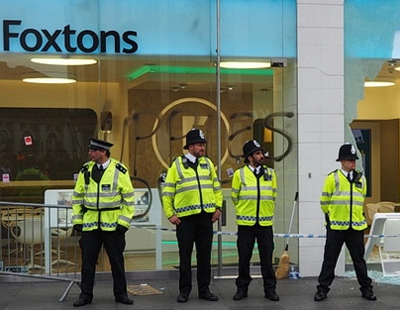 Gentrification is a divisive, provocative issue, but why are estate agents (especially Foxtons) appearing to bear the brunt of the public’s anger?

As reported in Estate Agent Today last Monday, a Foxtons branch in Brixton had its front window smashed in by vandals protesting against gentrification of the area.

The incident occurred during a 1,000 strong demo organised by Reclaim Brixton. As well as the front window being completely shattered, graffiti saying ‘yuppies out’ and ‘no evictions’ was daubed on property adverts and the walls of the office.

The protest comes amid rising anger from residents over soaring rents and house prices as well as what is seen as over-the-top regeneration projects designed to rip the heart and soul out of Brixton. In addition, there is an ongoing fight to save the railway arches under Brixton station and various campaigns against social housing evictions on local estates.

Advocates of gentrification say it makes places safer, cleaner and more desirable to outside investment, thus lowering unemployment and solving other socio-economic problems. On the other hand, critics say it drives poor people out of their homes to make way for middle-class people, hipsters, greedy land developers and wealthy corporations. The argument goes: if you take the variety, community and edge from an area, it loses its soul and vibrancy.

Detractors point to places like Hackney, Shoreditch and Soho, where they say the introduction of big money has seen trendiness replace grit and authenticity.

Foxtons, more than any other estate agency, seems to be seen as the face of gentrification. They have been labelled ‘the estate agents that give estate agents a bad name’. Plus, the more they attempt to expand their business the more unpopular they seem to become. But why are they so disliked by some quarters of the public?

It might be the fleet of Minis and flash offices or it might just be the firm’s rapid growth in recent years. Foxtons’ relentless expansion programme across London has drawn criticism from many – as well as in Brixton, they have faced significant opposition when opening new offices in West Hampstead and Stoke Newington. Last month planning officers denied them the chance to open a new office in Kentish Town.

All this would point to them becoming the estate agent Londoners love to hate. There is a fine line between growth and over-saturation, and evidently some believe Foxtons have crossed this line.

On the other hand, their success can’t really be questioned, which suggests they aren’t quite as despised as these high-profile incidents would suggest. Back in March 2015 they defied the naysayers and City experts with some upbeat results, recording an 8.2% increase in pre-tax profits to £42.1m. This week the firm reported revenues of £33.1m in the first three months of 2015, a 3.1% decrease compared to 2014. Despite this, the lettings side of the business brought in 5.4% more in the first three months of the year, compared to last year. Nick Budden, Foxtons’ chief exectutive, says the fall in revenue is down to the next week’s general election.

Regardless of revenues, the agency has continued its expansion programme this year. It has recently opened branches in Barnes, Walthamstow, Bromley and Ruislip, and its growth plans show no signs of slowing down. Which begs the question – if the Foxtons model is so unpopular, why then is it so successful?

Foxtons is clearly doing something right, but in a city where inhabitants are constantly reminded of a housing crisis rapidly growing agencies are likely to attract negative attention. Looking back to last week’s events, it’s patently unfair to lay the blame of gentrification at the feet of Foxtons. It’s not Foxtons’ presence that is forcing people out of Brixton. As an estate agent they are merely reacting to market forces and cannot be held solely responsible for a wider societal problem.

While there is a debate to be had over the pros and cons of gentrification, the protestors would perhaps be better served directing their ire towards the government rather than a company - no matter how Marmite - just trying to do its job.