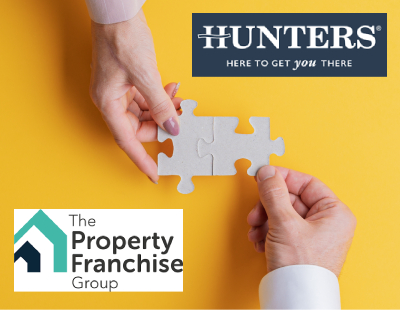 The takeover of Hunters by The Property Franchise Group means the combined operations will manage over 70,000 tenanted properties across the UK.

The takeover was effectively confirmed yesterday after many weeks of talks; the formal deal has to be put to the two companies’ shareholders, but both boards have recommended acceptance.

The takeover puts TPFG firmly in charge, with a reference in one announcement saying Hunters is now “a complementary business” to the rest of TPFG’s empire. There are also expected to be job losses, to be announced after a review.

The takeover adds 209 branches to TPFG, meaning it has over 400 High Street outlets plus some online operations via its EweMove brand.

TPFG chief executive Gareth Samples will remain overall leader of the group while the Hunters brand will continue to be led by current chief executive Glynis Frew, who will take up the role of managing director of Hunters within the enlarged group.

Hunters co-founder and chairman Kevin Hollinrake will step away from the business to focus on his political career - he is a Conservative backbench MP - and will also do “other pursuits” according to a statement.

The announcement of the takeover - which will be put to shareholders in the near future - says this about job losses: "The Property Franchise Group does not intend to initiate any material headcount reductions within the Hunters Group as a result of the Acquisition and expects that existing employees of the Hunters Group will continue to contribute to Hunters' ongoing success.

“However, to the extent that there are operational inefficiencies or a duplication of functions or roles within the Enlarged Group, this will result in a limited number of headcount reductions.

"At this stage The Property Franchise Group has not yet developed a proposal as to how any such headcount reductions might be implemented and will only develop and implement such a proposal once [a review] has been completed.

“Any implementation of headcount reductions by the Enlarged Group will be subject to comprehensive planning and engagement with employees and consultation with employee representatives as required by applicable law. Any affected employees will be treated in a fair and equitable manner."

Hunters - now subsumed into The Property Franchise Group - has...

Hunters, now part of The Property Franchise Group, has signed a...