Rents rose by a year-on-year average of 0.8 per cent at the end of last month - while inflation in the wider economy reached 1.8 per cent.

The decline in the pace of rental price appreciation, which was 4.7 percent as recently as June 2016, may become a concern for the lettings sector according to HomeLet, which has released its latest monthly survey of the market.

Rents in Greater London were virtually unchanged over the 12 months to the end of February, up by just 0.4 per cent over 12 months.

Over half of the 3,726 landlords surveyed by the firm expect to have to raise rents in the face of mounting cost pressures; however, almost a third of those plan to defer the increase to 2018.

HomeLet says this presents a dilemma for many landlords.

On one hand, factors such as next month’s tax changes - when mortgage interest tax relief starts to be reduced - threaten to raise costs for many. On the other, landlords appear to be acutely conscious of the need to ensure rents are affordable for tenants.

The survey also underlines landlords’ determination to maintain their strong relationships with tenants - 96 per cent of landlords say they are happy with their current tenants.

Here is HomeLet’s infographic showing rent movements across the UK: 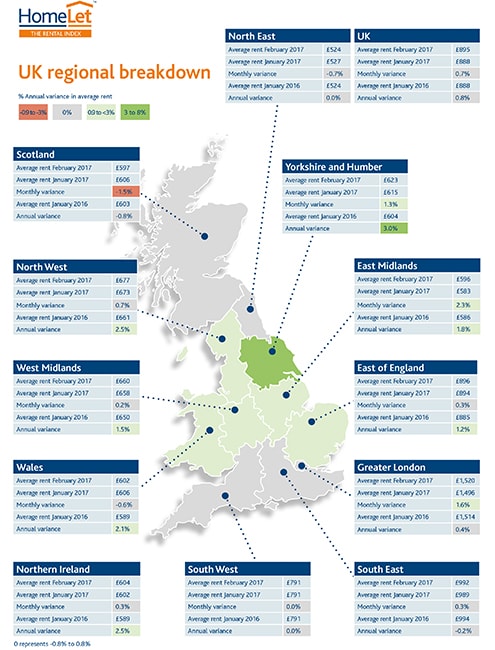 Belvoir says new figures from across its network of agents shows...

Average tenancy in UK is now 20 months - and many are longer ...

Housing minister rules out rent controls for rest of this parliament ...