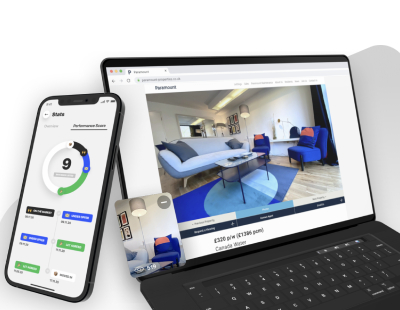 Paramount, which operates in north London, also claims it’s now letting between 60 and 80 per cent of its units sight-unseen.

The agency's managing director of lettings, Spencer Lawrence, says: "Our owners are really excited about Holofy Spaces because they can see that their properties are getting more views and are being let quicker."

The agency is cited by Holofy Spaces in a statement explaining that its launch was prompted by the spring lockdown, at which time virtual tours came into their own.

"Our app allows agencies like Paramount to take on properties they previously would have declined as they are not required to make as many time-sapping visits for in-person viewings."

The Holofy Spaces app has also helped Paramount to compete against its local rivals, the platform claims. There are over 60 agents operating in Paramount's core areas of NW2 and NW6. Over an eight-week period, many of these large agencies completed a third fewer deals than the one-branch firm, it says.

Paramount says it has recorded growth of 75 per cent when compared to 2019.

"We’re aiming to reduce the stress and time wasted on all sides of a property transaction. Virtual tours allow agents to be more efficient and subsequently improve customer satisfaction levels" Cristea adds.

"Our app simplifies and speeds up the virtual tours process. Agents can provide everything owners and residents need to know in a virtual tour which takes around 20 minutes to complete.

"This allows them to spend more time providing other key services and be available to carry out in-person viewings for qualified applicants who want to see a property in person before making an offer" he concludes.

A free digital training academy has been launched to guide agents...

The government has admitted that “hundreds of thousands” of people will...