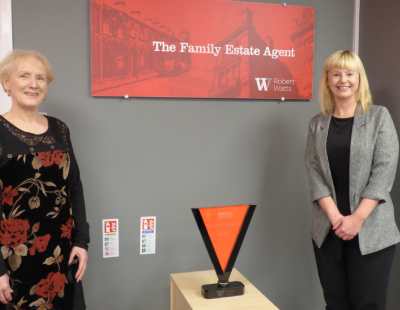 A family-run lettings and sales agency has launched an employee of the year award in memory of a late colleague.

The Vic Southerington Award, which was voted for by employees of the Robert Watts agency in Bradford, has been presented by his wife Margaret to Nicola Astley.

Nicola is an office manager who has worked for the company for over 15 years. A statement from the firm says she ”works tirelessly for the company and has remained fully committed and professional throughout difficult times without complaint, and her efforts haven’t gone unappreciated by her colleagues.”

Vic Southerington, who sadly passed away with Coronavirus in April, worked for Robert Watts in the early 1980s as a valuer in its first office; after moving to the Yorkshire Building Society for two decades, he returned to Robert Watts in 2002.

After the 2008 recession, Vic retrained as a residential and commercial Energy Performance Certificate Assessor, which he continued in a freelance capacity until earlier this year.

Agency director James Watts says: “Vic was a great guy, always selfless and would put himself out for anyone who needed help regardless of how busy he was. He would work all hours and always had time for a cup of tea and a chat - his legendary opening line of ‘have you got five minutes?’ meant you better clear the diary for the next hour. He made lots of friends in the industry throughout his career and was genuinely liked by everyone and will be sadly missed by all of us who met him.”

North of England agency Robert Watts is expanding into Halifax after...

It's that time again - are you ESTAS Letting Agent of the Month? ...

Yet another Eviction Ban extension - and then it will 'taper off' ...

The government has announced a further extension to the current ban...