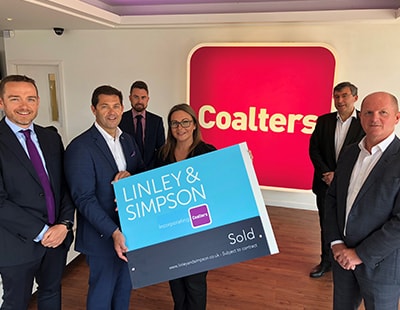 York's largest letting agency has completed the biggest acquisition in its 21-year history.

The deal sees Linley & Simpson's lettings portfolio grow to almost 6,000 properties, while the transfer of Coalters' staff takes its number of employees past 180.

“We are delighted to acquire an agency of the size, stature and reputation of Coalters into the Linley & Simpson family," says Will Linley, director of Linley & Simpson.

“We have ambitious plans to improve and innovate our services and, strategically, this deal is central to this continuing journey of planned growth."

Linley says that 'increasingly challenging' conditions have opened an 'unprecedented window of opportunity' for his firm to develop through acquisition.

Reuben Barrett, founder and managing director of Coalters, adds: “We launched the business from my spare bedroom in 2007 and, thanks to our team, I’m proud of how far we have come and what we have achieved."

“We share a lot of synergy with Linley & Simpson – we are both forward-thinking agencies – and the pooling of our combined expertise and insight will create a really strong platform for the future.”

The acquisition of Coalters marks Linley & Simpson's 31st purchase since it was founded in 1997 and the fourth in the last two months.

Back in March, the firm announced a hat-trick of acquisitions which took it past the milestone of 5,500 managed properties.

To accommodate its growing size, the agency will be moving from its York city centre base to Coalters' larger offices in nearby Low Ousegate.

Consolidation in the lettings sector seems to be continuing apace as earlier this week the Romans Leaders Group announced it had made two further acquisitions.

Linley & Simpson, one of the North of England’s leading residential...

Yet ANOTHER takeover as lettings agency consolidation continues ...

A fast-growing regional chain of agencies has purchased another independent operator in...